We like to laugh at scams. Once exposed, security risks that fooled thousands turn into stories of “Who could have fallen for that?”

Once upon a time, a man named Victor Lustig notoriously sold a “money printer” for tens of thousands. Unfortunately, it turned out to be a pre-loaded box with less than $1,000 inside.  Similarly, the notorious ILOVEU virus has spread when surprised users were enamored by an unexpected email love letter. History is beset with security exploits that look foolish in retrospect. The funny thing about time is that hindsight is always 20/20. With a litany of avoidable mistakes, the obvious question is, “What security risks should we worry about today?” Here are the top 6 cybersecurity risks to understand as we work our way through 2019.

Print currency has become difficult to forge, whereas digital items are experiencing a sudden compromise in integrity. A Bloomberg anchor shows his Bitcoin QR code on TV, and it gets instantly stolen. People continue to post tickets for sale online, and their barcodes get copied.  As items go digital, their identity also becomes digital, and a new world of forgery is upon us.  Even celebrities are being forged on a digital level. Risks in 2019 are two-fold: More items are going digital, and digital duplication is only getting easier.Take a moment to ask as each new service gets released – How good is the security of this service?

In 2018, Facebook was vulnerable to several security flaws that allowed hackers access to personalized data. Your digital presence is continually increasing in value, and with it, the temptation of theft. Not simply for money, but for a user’s digital essence which can transform into money. It’s a strange world we live in, but software that can identify your face is no longer something limited to big companies. Hackers can gather identities and use or sell it, too! Data has turned into digital currency. Expect new efforts to gather, not bank accounts, but you!

Ransomware is nothing new. The first popular ransomware was created in 1989 and requested users send $189 to a PO Box to get access to a computer and its prized files. Recently, holding files ransom has gotten popular again. With the advent of cryptocurrency, hackers can write software holding computers hostage without being identified when payment is received. And recently, hacker groups are starting to aim higher. Entire companies are compromised, and only a quarter of those are even getting unlocked! With brick and mortar stores closing left and right, each online business becomes a new target for these hackers. Trading physical for digital increases the ransomware domain.

Computers are integrated into everything – refrigerators, cars, doorbells, and more. It’s called the “Internet of Things” (IoT). Each of these devices provides another view into your life, and another window for cybersecurity risk. Devices can be used by cyber attackers in a myriad of ways: They could mine bitcoin for hackers, listen in on network traffic, or simply be a layer of protection for illegal activity. Unlike a computer that starts running slower, hacked devices don’t have an easy interface to observe who’s readily installing security updates. It’s a numbers game: The more “smart” devices, the more points of attack to worry about.

AI is capable of doing a myriad of entertaining things – from recoloring black and white photos to beating the world’s best strategists in board games like Chess and Go. One of the most frightening proposed uses of AI is a smart virus – a virus that knows when to stop being a virus, and then returns to its nefarious spreading in the dark. Current viruses have hardcoded evasion techniques that anti-viruses can counteract. As AI becomes more attainable, the infamous AI virus moves from fiction into a likely reality.

Risk 6:  The Dark Web is Coming to You

This last risk is a scary one. TV Shows love talking about the “Dark Web”. In the past, the Dark Web wasn’t a problem for normal users. Access to Dark Web conversations would require activity on some sneaky chat engine. However in 2019, the advent of the Dropgang, brings the Dark Web to you.

Since authorities have identified Dark Web servers and post-office drop points, the Dark Web has moved into the safety and security of common chat applications. Authorities can’t just take down Google Chat, and that means the barrier between your loved ones and a mistaken illegal transaction has just gotten smaller. In a more frightening realization, Dropgangs hide their wares in public areas. The cyber-criminal delivery network has gone into the public, creating a new tangible risk, to a once faceless entity.

Which of these risks will be the next sordid example?  Which cybersecurity risk is going to birth the next destructive wave of compromised users? We can only prepare an incident response plan and then identify the risks that are foreseeable. In the information era, it’s the informed who are the influencers. Keep your eyes on these Top 6 risks to best protect yourself and your company.

Want to learn more about keeping safe in the cyber world? Check out the latest product offerings in the GlobalSign portfolio – from Digital Signatures to PKI Automation. Now is the time to take action!

Continue issuing SSL Certificates containing internal server names and reserved IP addresses without the need to run your own in-house CA or use self-signed certificates
Secure internally used domain names and servers that do not require public trust
Issue certificates with options which would otherwise not be permitted under public hierarchies, including the use of SHA-1 and 3-5 year certificates.

What are they, and what impact is there on businesses outside of the EU? Following the EU Commission’s announcement on 18… 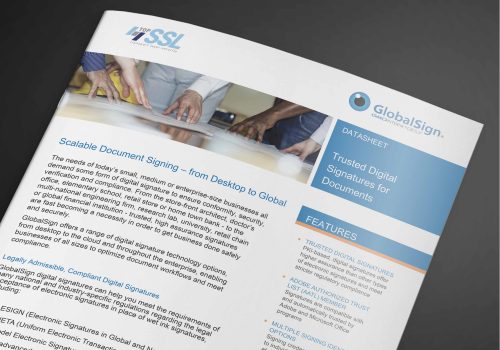 The needs of today’s small, medium or enterprise-size businesses all demand some form of digital signature to ensure conformity, security,…

Sorry, we aren't online at the moment. Leave a message.

We'll get back to you as soon as possible.
Login now

Help us help you better! Feel free to leave us any additional feedback.